Joanna Malinowska & C.T. Jasper:
Who is Afraid of Natasha? 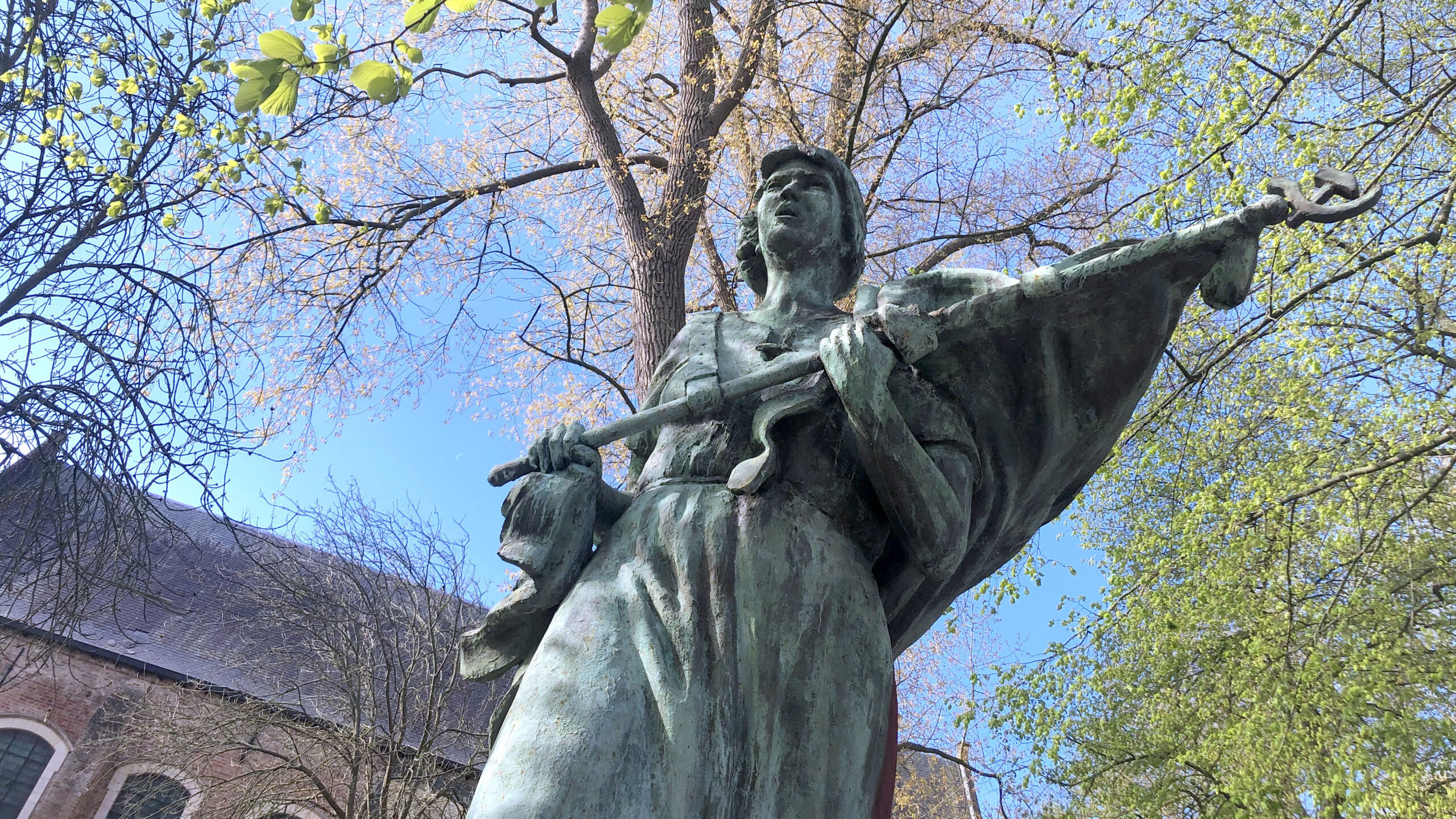 In Who is Afraid of Natasha? Joanna Malinowska and C.T. Jasper reconstruct, resurrect and recontextualize a fallen public monument from the Soviet era. Nicknamed Natasha, an anonymous woman marching with a flag was once an essential element of the Monument to the Polish-Soviet Brotherhood, erected there in 1953 in the artists’ childhood city of Gdynia. Apart from the official propaganda, Natasha was also symbol of the Stalinist oppression. Malinowska and Jasper upend these memories and reposition Natasha as a hero for our current era. The red lightning emblazoned on her dress makes reference to the ongoing fight for women’s rights under an increasingly conservative government in Poland. #ogolnopolskistrajkkobiet⁠⁠⁠⁠

This sculpture is presented alongside a film, both on view at Triennial Bruges 2021: TraumA through October 24th. 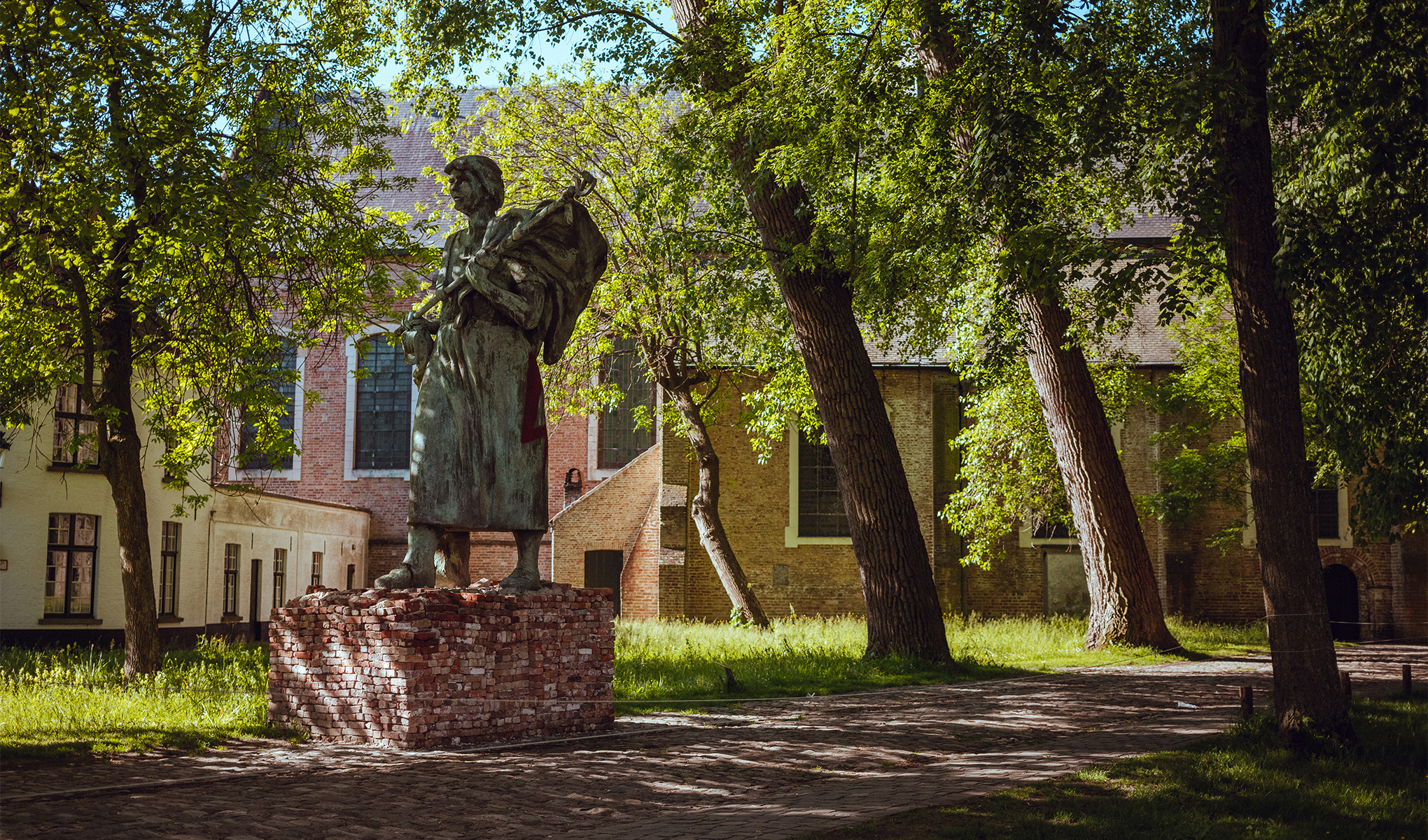 For thirty-seven years, a marching female figure with a flag was situated in the main urban artery of the Polish seaside city of Gdynia. Commonly known as Natasha, the woman was the most essential element of the Monument to the Polish-Soviet Brotherhood, erected there in 1953, at the height of Stalinism. The bronze figure sat atop a high column adorned with figurative reliefs and an inscription that preached “eternal glory to the liberators, the heroic soldiers of the Soviet Army.” Facing the West, Natasha was symbolically carrying the mission of Communism further into Europe. Simultaneously, like many public monuments erected in socialist Europe, this one also served as a stage for official state events—the ideological performances of the Soviet bloc’s might.

A female body cast in bronze and positioned in a public space is, at best, an allegory. It stands for victory, it stands for heroic fight, or for other immaterial values that a society decides to immortalize in a monumental form. The last thing the body stands for is the actual person, the female subject that lent the sculpture its shape. Natasha’s body was given to her by a young female student of sculpture in Warsaw the early 1950s, Magdalena Więcek—later herself an established artist. Or, rather, it was given to Natasha by her male professor, Marian Wnuk, the author of the sculpture. He knew Więcek’s body well since the two were lovers. 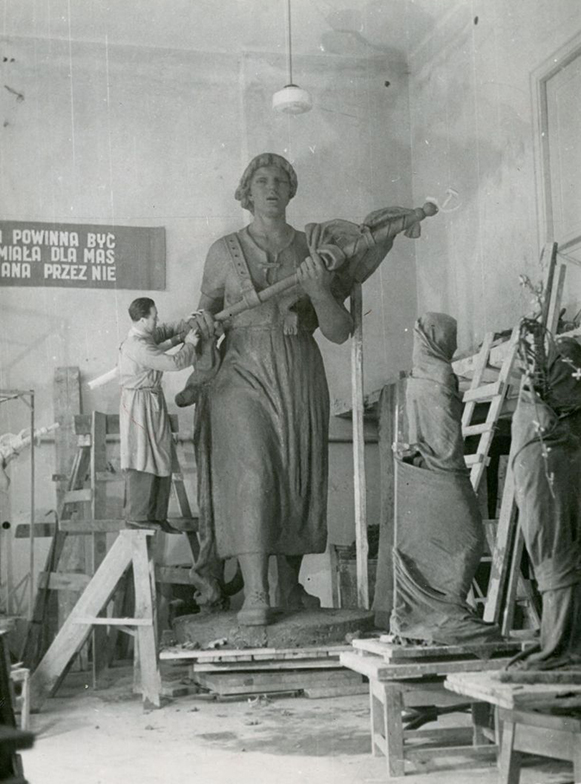 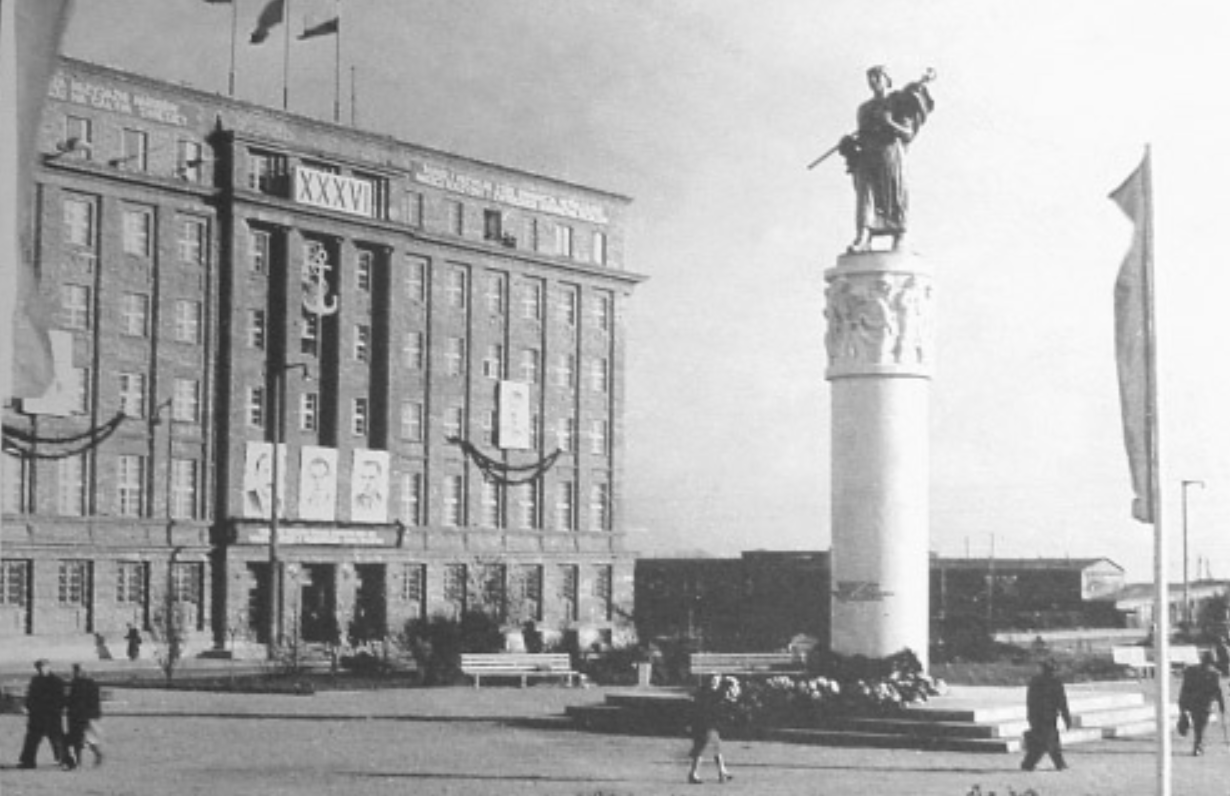 Archival images: Marian Wnuk in his studio with the sculpture of Natasha [left]. Wnuk’s monument in its original location in Gdynia [right]. Archival image: The model, Magdalena Więcek with the head of Natasha during installation in 1953.

Wnuk’s monument was supposed to stand for the Polish-Soviet friendship, a common trope in Stalinist propaganda. As a result, to many in Gdynia, Natasha stood for Communism. Bottles of champagne were opened when the sculpture was removed on July 22, 1990 —the date specifically selected by the removal committee to symbolically undo the four decades of Soviet control in Poland, cemented with a Constitution signed on July 22, 1952. The sculpture found its resting place at the city’s Soviet cemetery. Natasza—nie nasza (“Natasha—not ours”), summarized one contemporary Gdynian combining the local anti-sentiment with an amusing rhyme, when asked by Joanna Malinowska and C.T. Jasper about his memory of the sculpture.

Replica of Natasha during installation in Bruges. Image by Jasper van het Groenewoud.

Another of the artists’ interlocutors, a museum director, suggested Natasha could be seen today as an allegory of a female migrant. Originally a figure of a woman who marched to Poland in 1944 with the Red Army, Natasha could now represent all those women who come to Poland from Ukraine and Belarus in order to escape violence or political turmoil. “Instead of removing an allegory, one can impose new meaning onto it.”

Following that line of thinking, Malinowska and Jasper took a somewhat different route. The artists commissioned a copy of Natasha and adorned her with a red lightning, the symbol of Poland’s “Black Protests” that shook the country multiple times in the past few years. Millions of women and men took to the streets to protest planned restrictions to the country’s already restrictive abortion law and to voice their objection to the patriarchal system defined by the ultra-conservative politicians together with the ever-present Catholic Church. Equipped with the lightning, Malinowska and Jasper’s Natasha becomes one of those determined, strong-willed contemporary Polish women with their own independent subjectivity. Her placement inside the Beguinage, the place where for centuries women retreated to live their lives away from both the secular society and the constraints of monastic life, heightens this element of self-determination and constructive agency. 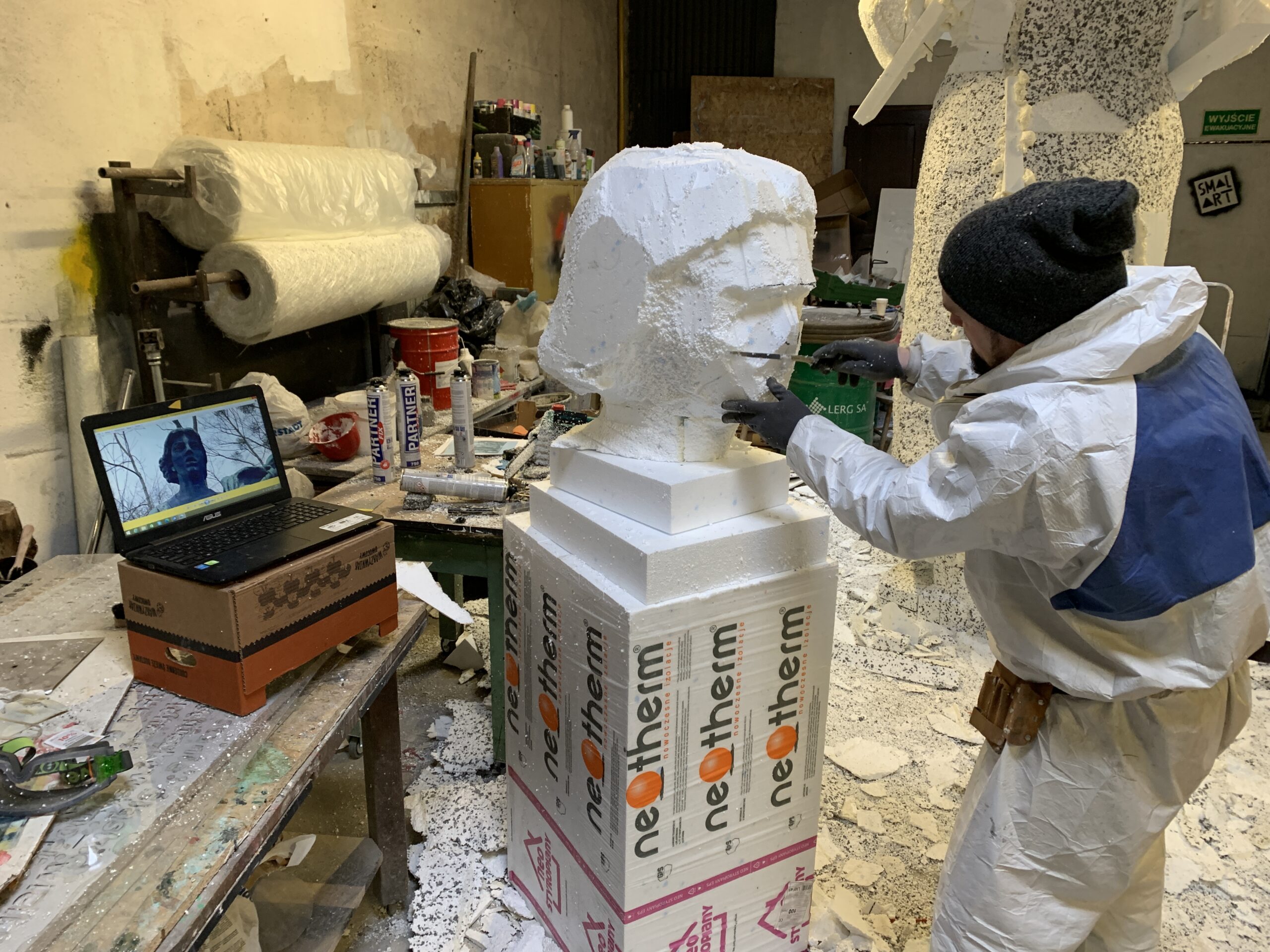 Replica of the monument in progress. Images by Szymon Malinowski. Ultimately, Who is Afraid of Natasha, is a work as much about the past, as it is the present. The reconstructed Natasha lends her body once again, this time to the collective memory of contemporary Gdynians. Once intentionally repressed, the memory of Communism is now re-created in relation to the present. In Malinowska and Jasper’s reconstruction, Natasha is reclaimed to be nasza, ours. As she has, possibly, always been. 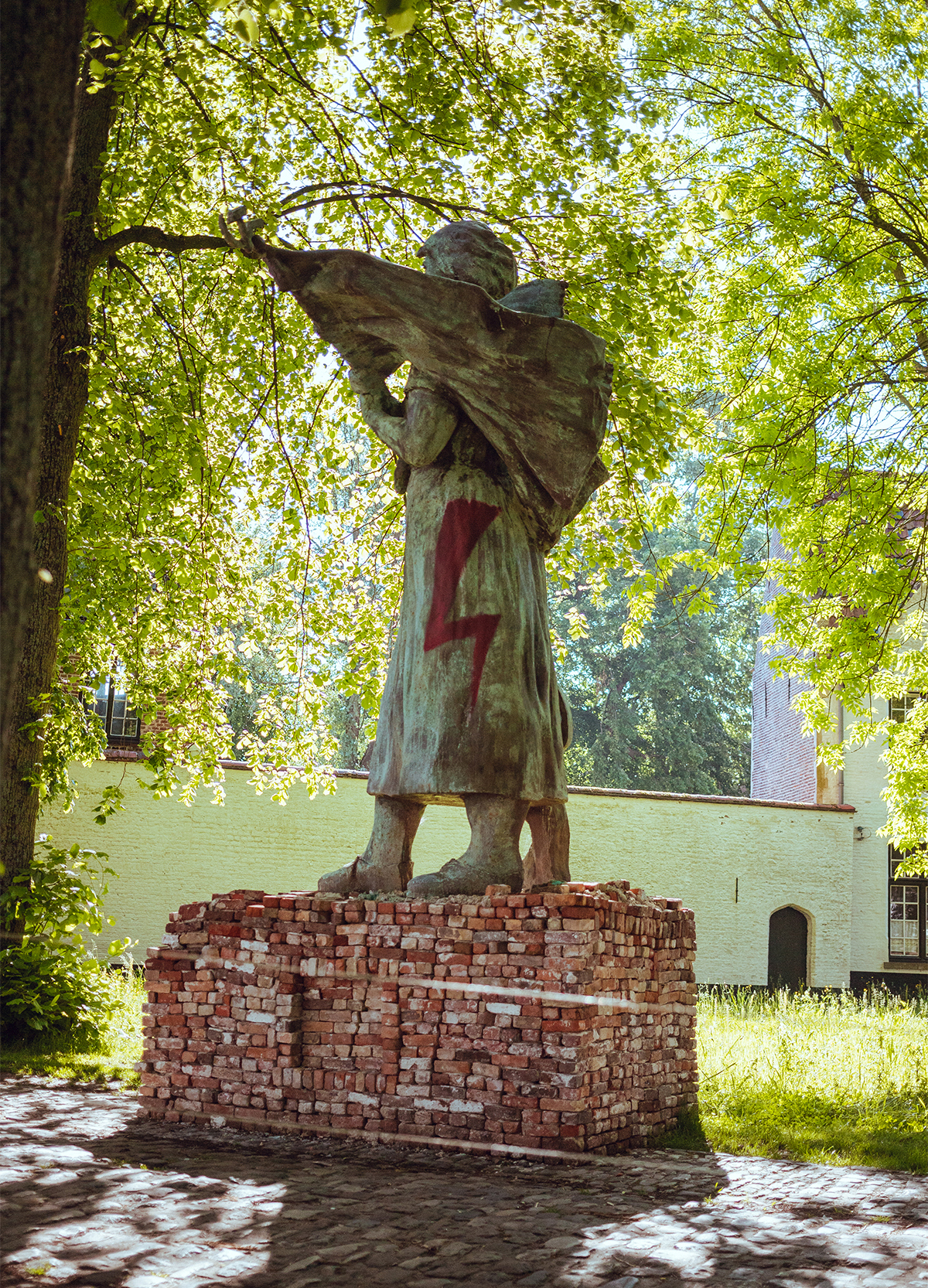 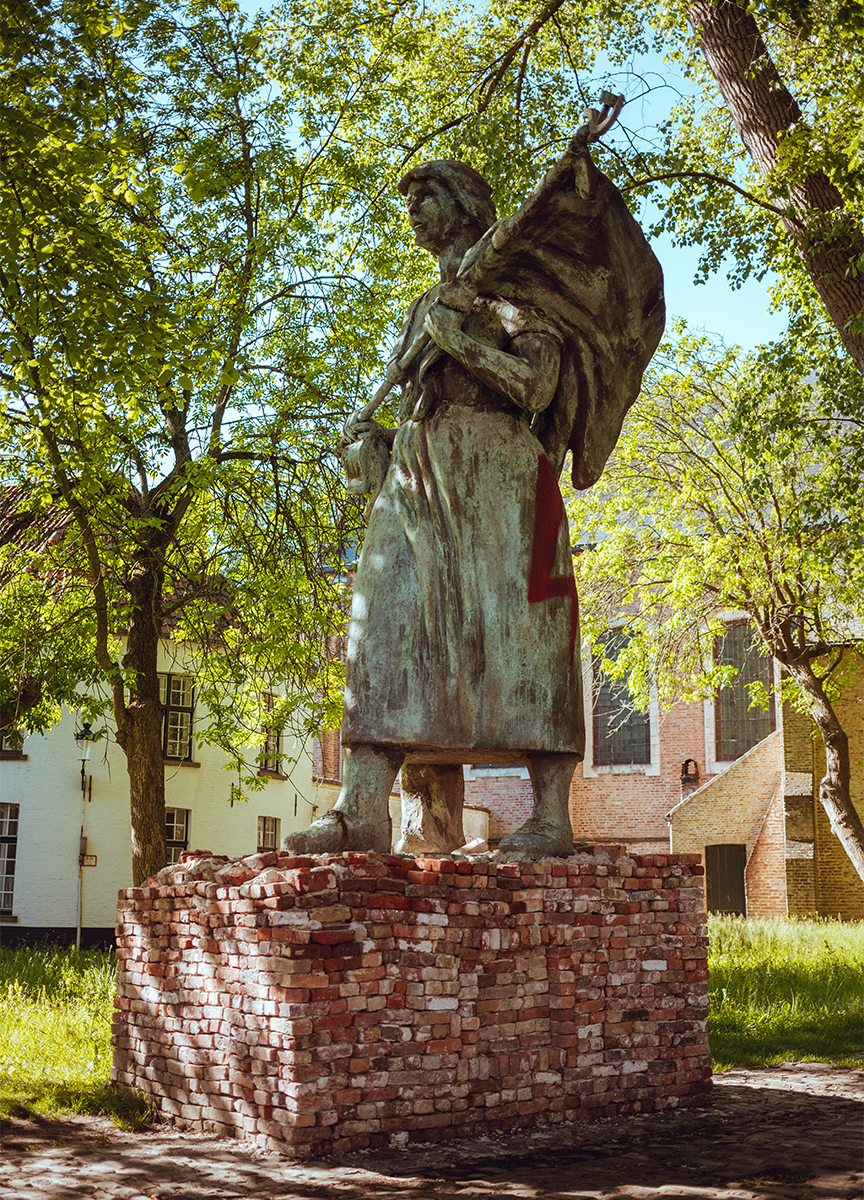 The sculpture of Natasha is accompanied by a short film investigating the hypothetical identity of the woman carrying the flag adorned with the hammer and sickle. Shot during the height of Covid-19 pandemic, the film is comprised of short vignettes of people talking to the invisible other on their cellphones. Through these conversations with local public figures, art historians, curators as well as accidental passers-by, we enter the world of contradictions and misinterpretations. 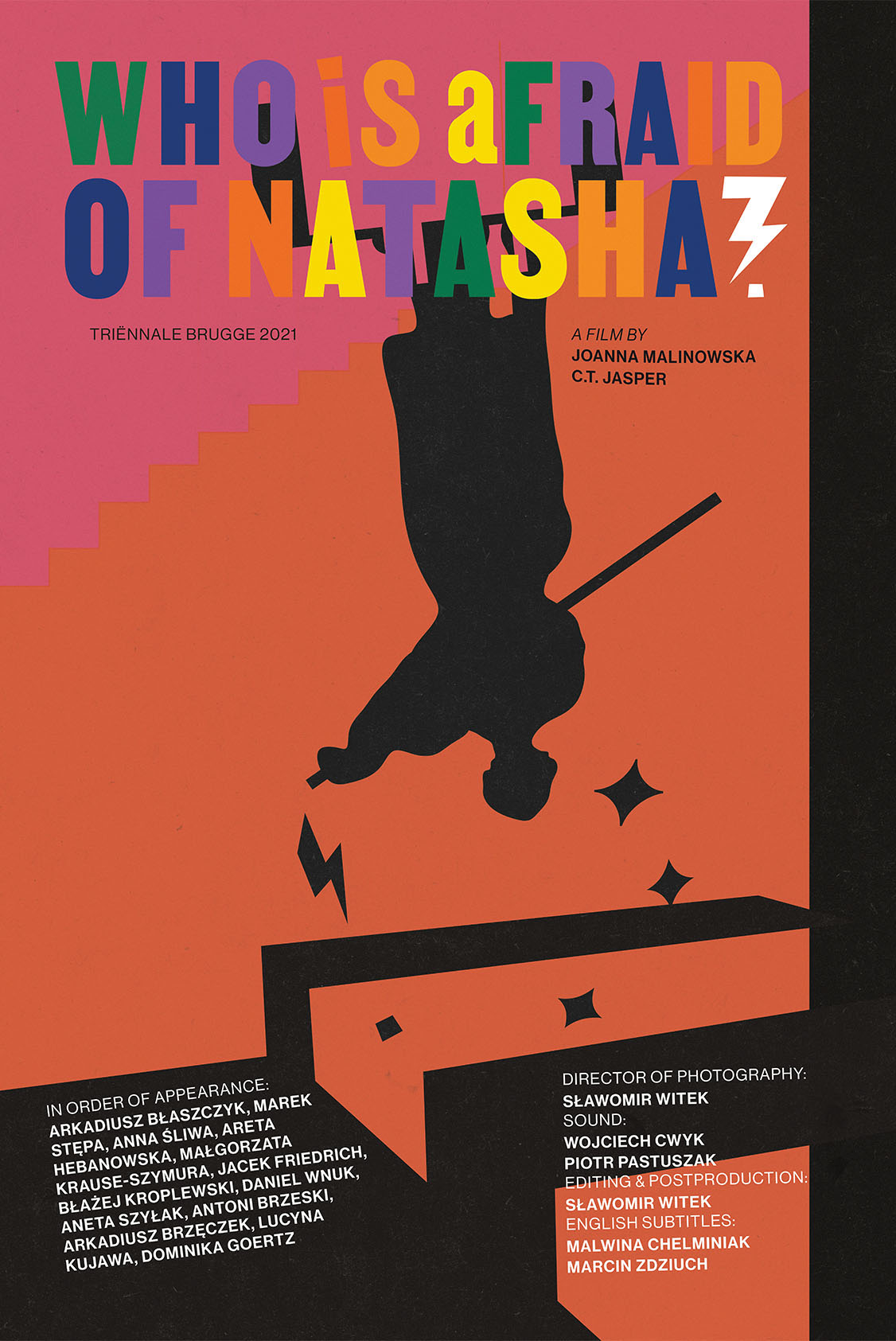 Over the recent years, Joanna Malinowska and C.T. Jasper have been frequent collaborators. Their work spans installation, film, video, sculpture, and explores themes of national identity and its paradoxes, filtered through the lenses of "experimental anthropology.” In 2015, the two artists represented Poland at the Venice Biennale with the project Halka/Haiti 18°48’05”N 72°23’01”W, which was later shown at the Göteborg Biennial for Contemporary Art, Ghetto Biennale in Port-au-Prince, the Krasnoyarsk International Museum Biennale, and many other exhibitions around the world, from Japan to Australia. Their project Mother Earth Sister Moon was commissioned by the Performa’09 in New York and later shown at Nottingham Contemporary and Warsaw’s Zachęta – The National Gallery of Art. In 2015, Malinowska and Jasper showed Relations Disrelations in the Łódź Museum of Art, an exhibition which summed up their individual and joint works. Among their recent projects are The Emperor’s Canary, a sound installation commissioned by the High Line in New York and later presented at the Centre Pompidou-Metz in France; the installations In Savage Society (GGM, Gdańsk, 2019) and Jurassic Garden (Le Guern, Warsaw, 2020.) 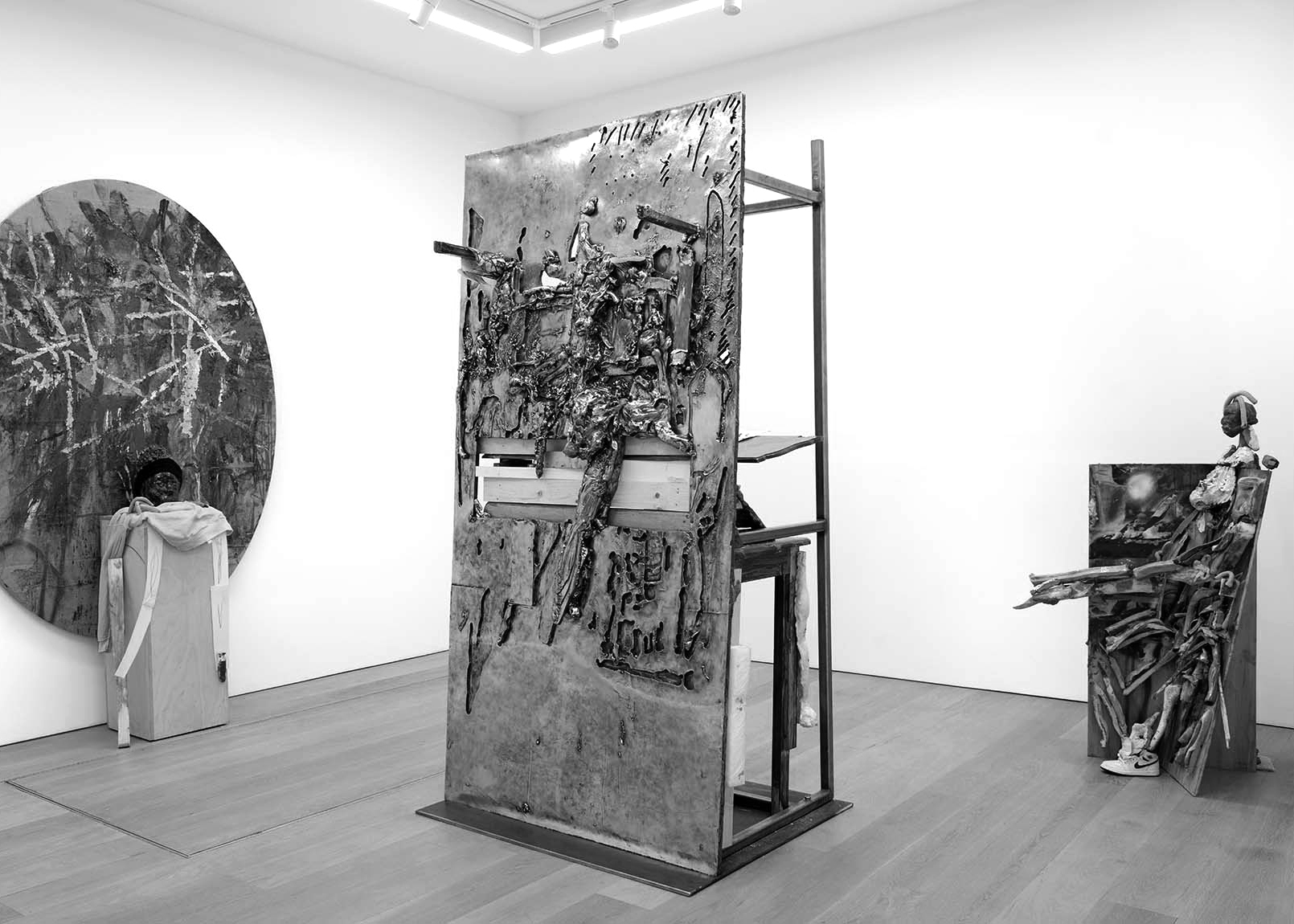 Who is afraid of Natasha?Joanna Malinowska & CT Jasper 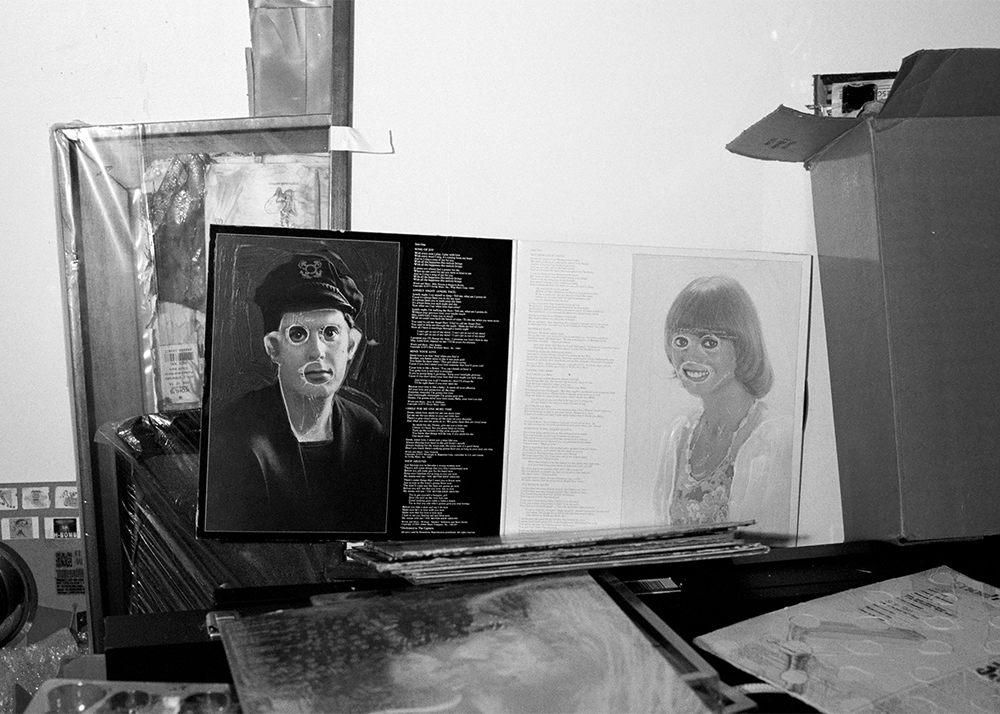 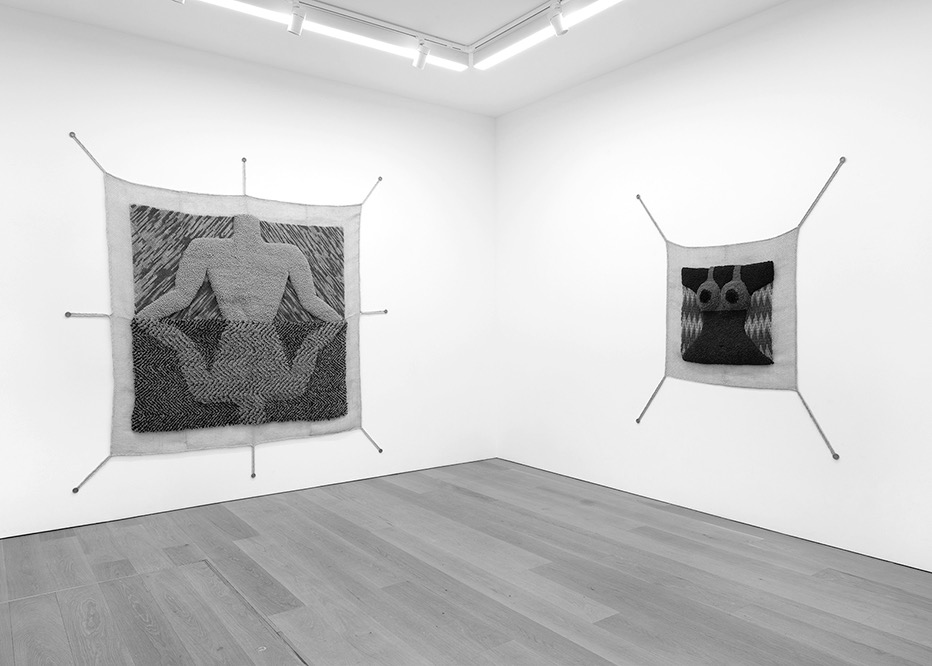 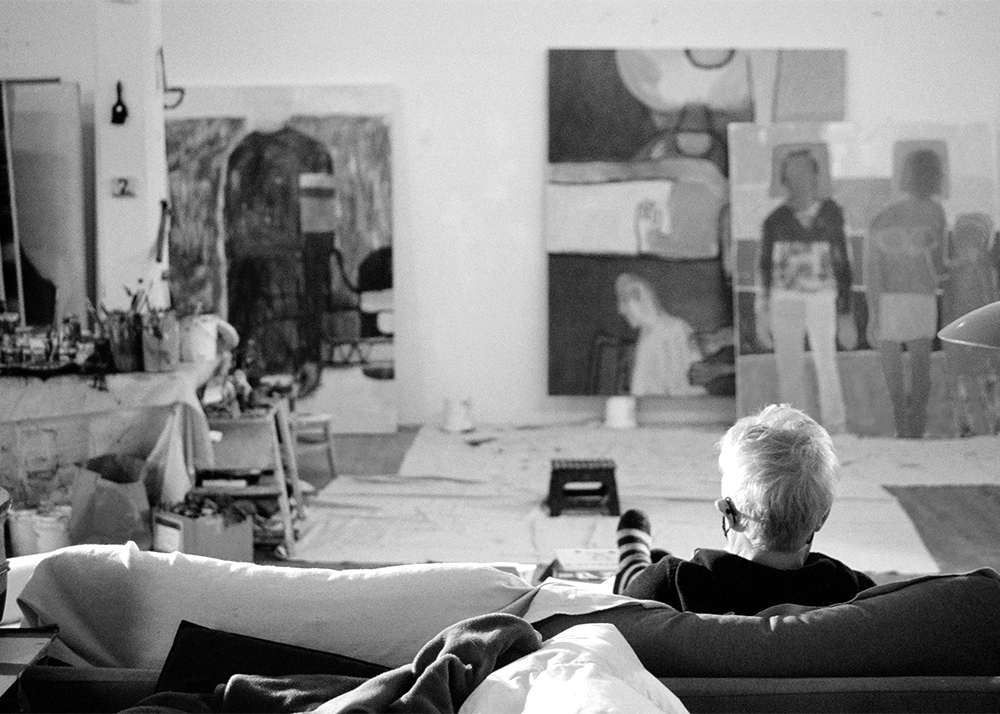 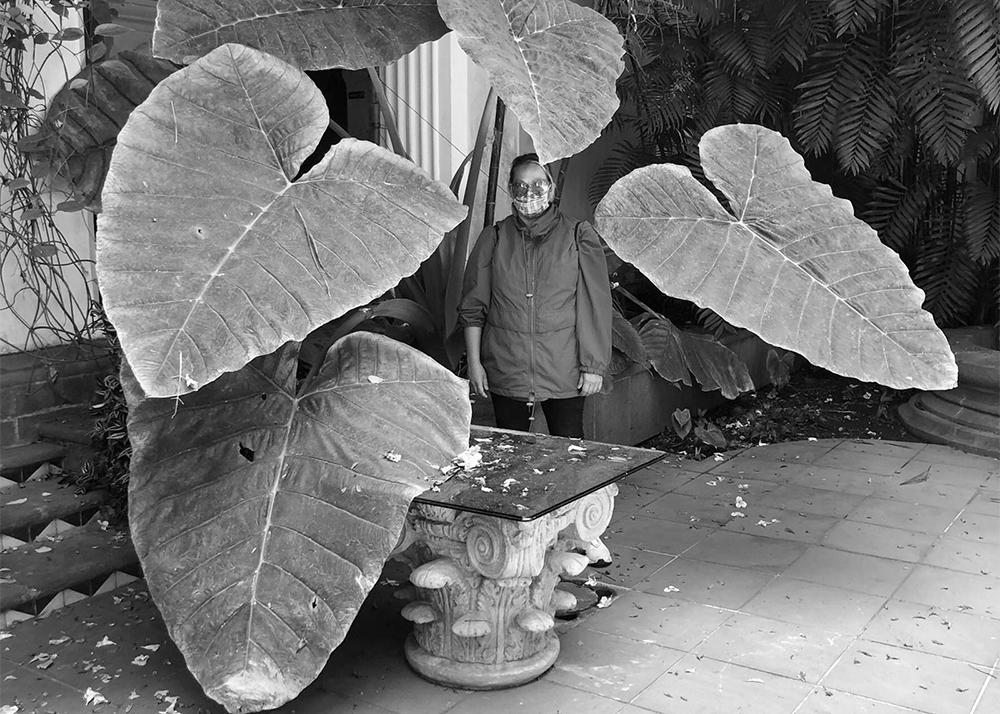 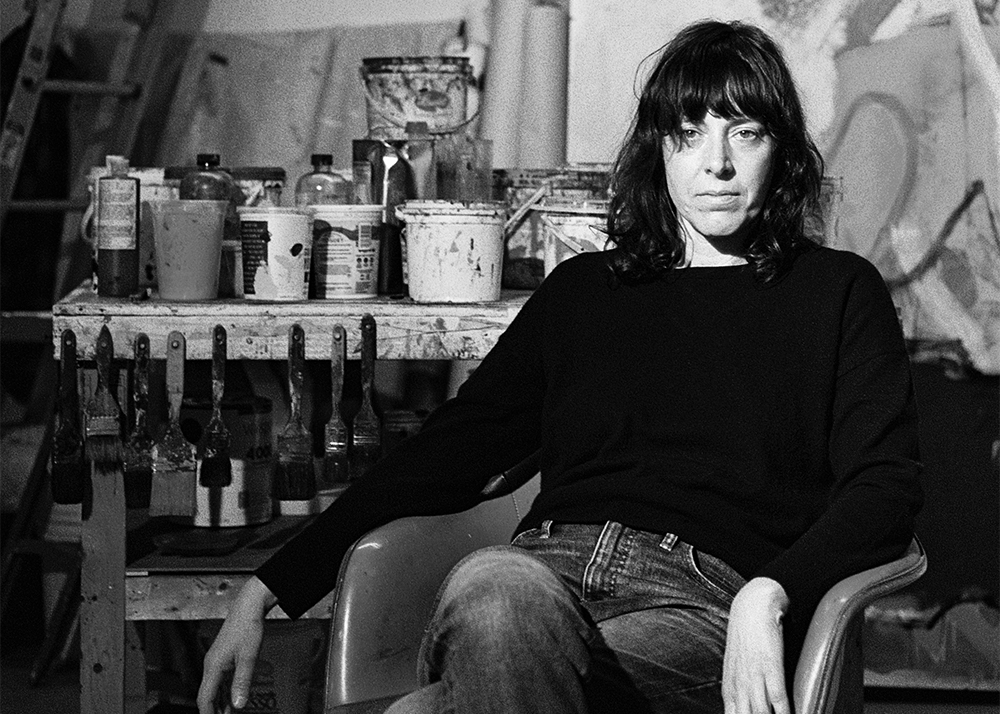 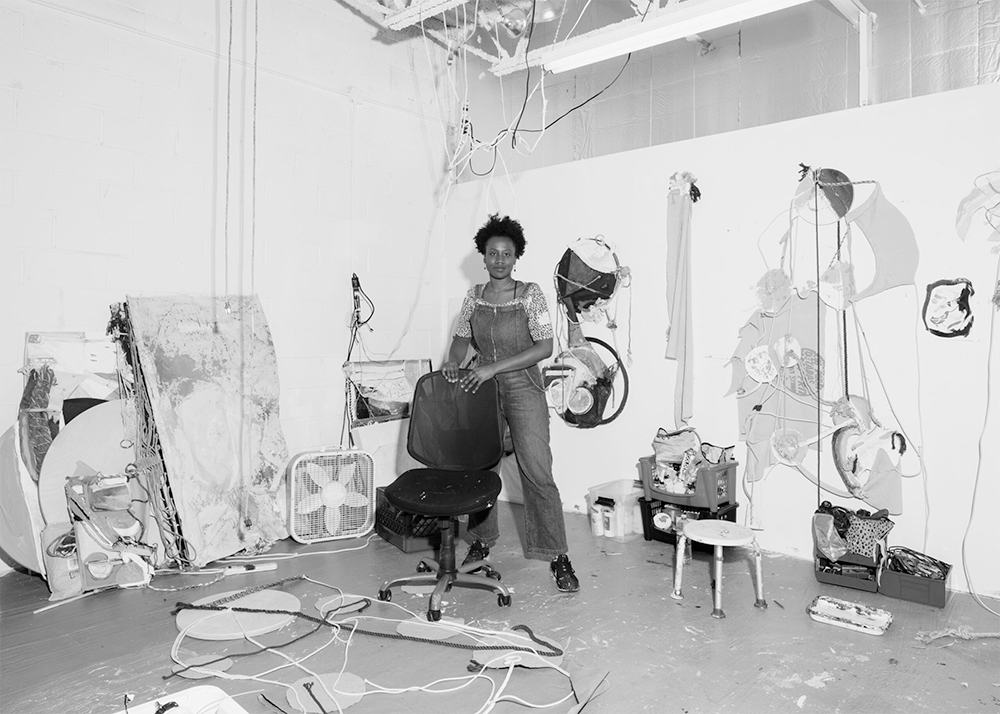 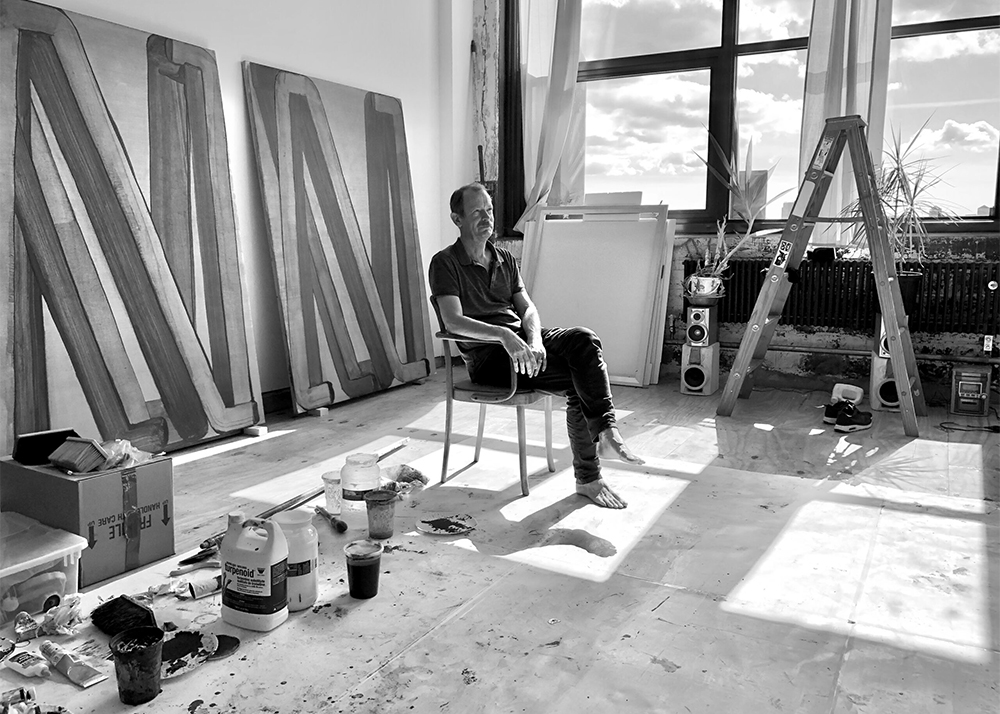 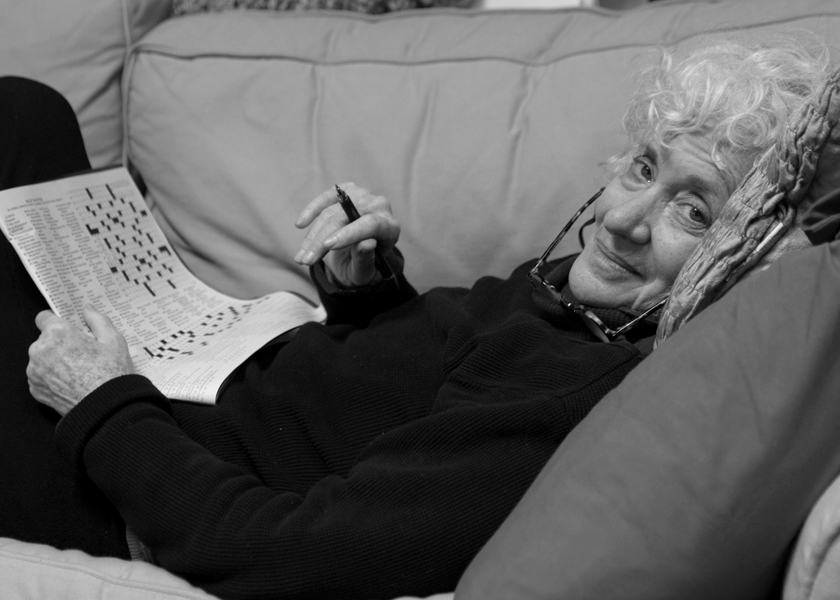 The Summer Becomes a RoomJoan Snyder